A report on gambling and betting in Nigeria.

There are multiple definitions of betting, many of which refer to betting as the act of placing a wager on a predicted outcome of an event. Betting operates on the theory of probability and can be said to have taken place when one stakes a sum of money on an upcoming event they feel strongly about.

The Oxford dictionary defines gambling as “taking a risky action in the hope of a desired result.” On the back of this definition, a subtle, yet distinguishing factor between gambling and betting is that gambling can simply connote ‘risk-taking’ that is as benign as moving your car from under a scorching sun to the other side of a parking lot in a mall – knowing fully well that the space in the shade might be occupied before you get there, on top of losing that earlier spot too. Therefore, even though gambling may or may not involve cash stakes, betting is a form of gambling that always involves wagers; mostly in form of cash stakes. For the purpose of this piece, we will assume they can be used interchangeably.

From friends betting on how many bottles of beer they can finish to classmates betting on who will score lowest in a test, betting has always been a part of human nature. Now, just like many other activities that humans casually engage in, a capitalist society has monetized, regulated and industrialized the betting industry in Nigeria such that a range of events – mostly but not necessarily sporting, are predicted by bookmakers who offer odds for gamblers to stake wagers on.

Gambling can be defined as any activity (e.g. a game of chance or skill) where an item of value is placed at risk in an attempt to gain something of greater value.

Betting makes up about 35% of the global gambling market. The other gambling market components include lottery, casino, and poker. In 2016, the gambling industry made a total gross profit of 450 billion US dollars which was higher than Nigeria's GDP in the same period. In summary, gambling is a big deal worldwide, and betting makes a significant chunk of it.

Mathematically, the odds are stacked against the player when it comes to gambling. The bookmaker has that advantage over the bettors. A bookmaker is a person who “ makes a book”, which means to lay bets on the various possible outcomes of a single event. Currently, bookmakers in Nigeria include Bet9ja, NairaBet, MerryBet and Winners Golden Bet. 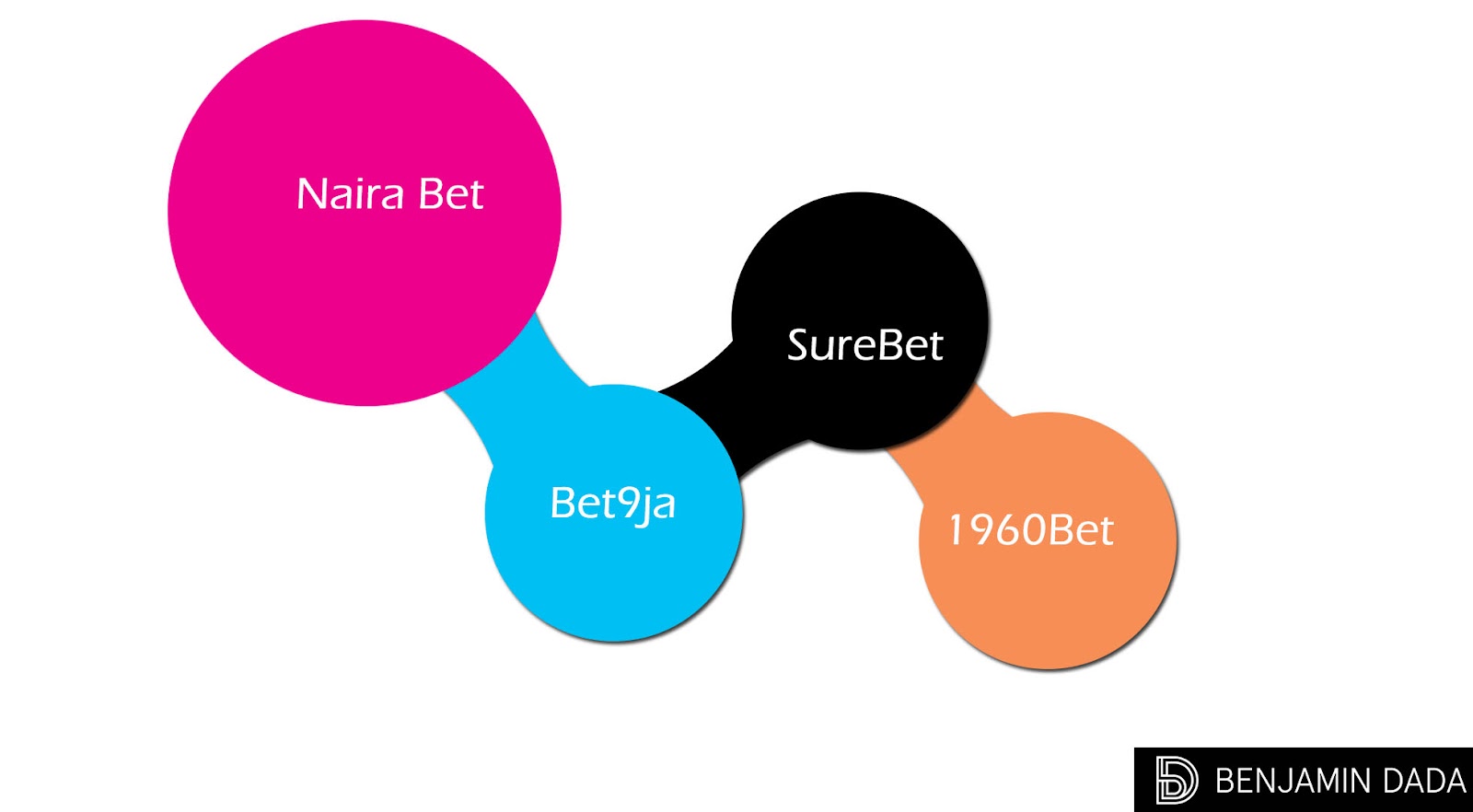 Due to the high level of financial exclusion, punters have had to go through Agents (brick and mortar shop owners) to place bets. However, in recent times, betting companies have started to partner with telcos to avail bettors a short-string (via USSD) which can be used for direct payments into online accounts. Even banks and other fintechs are exploring collector relationships with betting companies. The incentive is clear; if banks are able to help the betting companies collect directly from the bettors, it eliminates the need for agents, and with that, they keep more of their revenue.

Being an agent is lucrative, as agents earn a commission on sales. An agent in Ikeja, a densely populated city in Lagos State, reports making up to 75,000 naira in commissions on a good week. Also, they get to keep the unpayable fractions (kobo value) on bettors’ earnings.

In a typical agent’s shop, a punter wields a pen and a paper. The punter checks the betting board to get the ID of the game(s) he wishes to bet on. In front of the ID, he writes his prediction (e.g. "away team to win ") and submits to the computer operator who inputs it into the system and gives him a ticket. You win, you tender your winning ticket and cart away your lot. You lose, you join the thousands around the world who have also lost that day.

For instance, Dele* who does not have an account with Bet9ja walks into one of their outlets in Tanke. He is looking to bet on the Chelsea vs Arsenal match scheduled for 3 p.m. The match’s ID is 3456, so he notes it down alongside his prediction of "away team to win". Upon entering the shop, he realises that he can also bet on Baby, a 3D virtual fantasy game. So, he notes down the ID on the same piece of paper and hands it over to the operator who then plays it for him by entering it into the system. 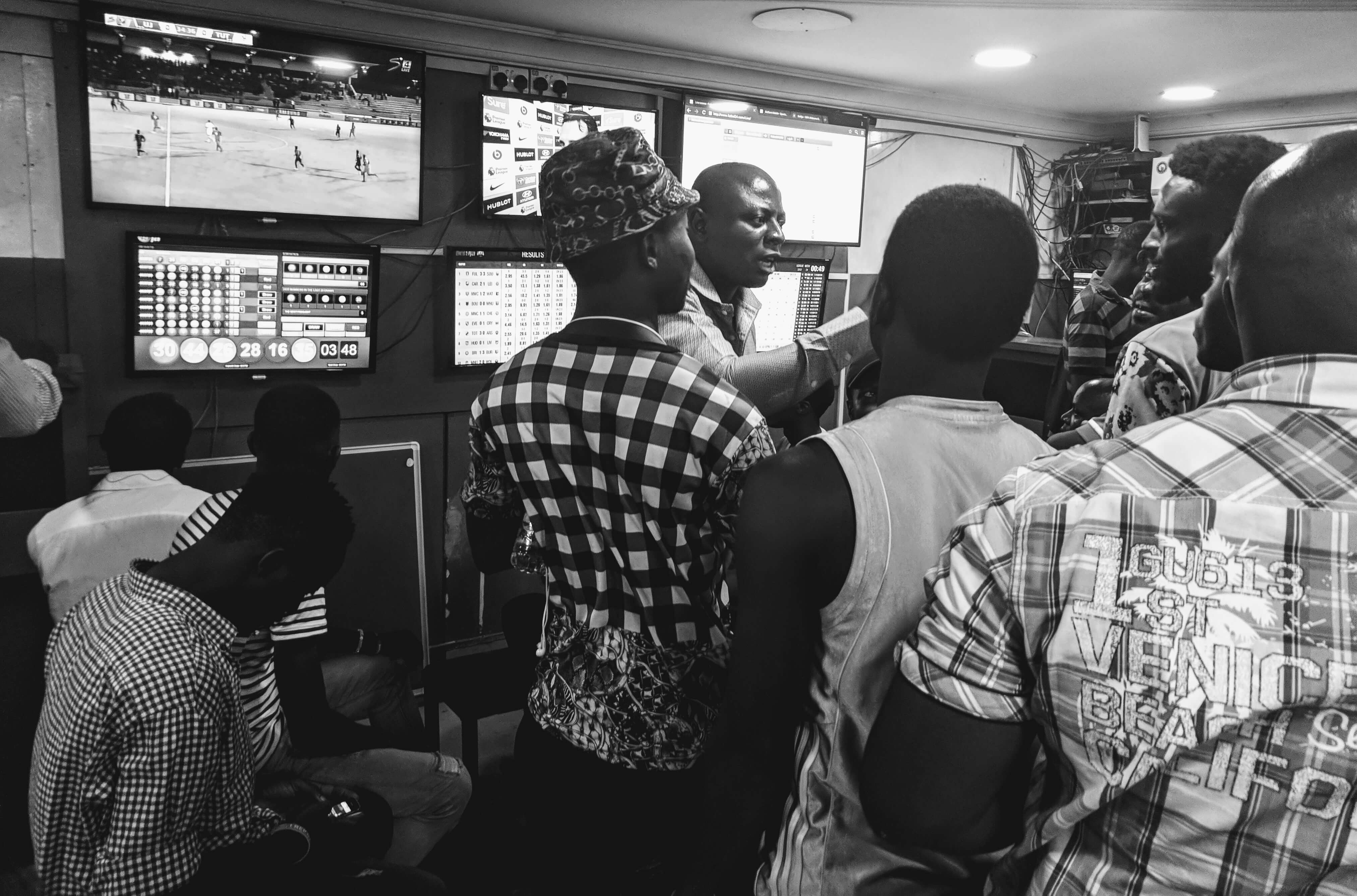 Bettors in a betting shop in Lagos, Nigeria

27-year-old Agbajor "Leo" Emmanuel is one of such agents. He became a Winners Golden Bet agent in the Tanke area of Ilorin whilst still an undergraduate at the University of Ilorin.

When asked about why he became an agent, he responded, "I just felt like making money". Since then, he has left his first shop for a bigger one - signs of a booming business. When going for his service year (NYSC), he hired a manager for his shop.

Agbajor, a Delta state indigene, has no plans on returning there because he has a "...booming business here [Ilorin]".

Gambling gives its players a feeling of pleasure and hope – pleasure in the activity and hope for a "big win". One respondent said he bets on football for the "thrill" – a sudden feeling of excitement and pleasure. Another respondent has stopped gambling with the minimum 100 naira and now gambles with 500 naira in hopes that he will win big.

The traditional view of gambling regards money as the primary motivation. It does not explain why some people refer to gambling as a pleasurable activity and not just an opportunity to make money.

The reality is that gambling leaves a lot of people worse off than they started. Also, the probability of a "big win" is rare. However, the widespread organic publicity of the very few who get that big win makes bettors believe that their "breakthrough" is near.

The downsides of gambling span financial losses, and reduced productivity to an even more dangerous gambling disorder.

Is there such a thing as a gambling disorder in Nigeria?

In 1994, the APA finally added “Pathological Gambling” to the Diagnostic and Statistical Manual of Mental Disorders (DSM-IV) as a mental disorder.

In America, the DSM serves as the principal authority for psychiatric diagnoses and treatment. Gambling addiction listing goes on to show how the developed world (West) takes addiction to gamble seriously. This is a far cry from the casual way it is treated in Nigeria.

In DSM-5 published in 2013, it got renamed to "Gambling Disorder" with new defining criteria. This change reflects the increasing evidence that for some people gambling becomes an addiction. The effect they get from it is similar to the effect someone suffering from alcoholism gets from alcohol. Research has shown that gambling activates the brain reward system with effects similar to those of substance addiction.

DSM-5 added a "craving or a strong desire or urge to use a substance" as one of the criteria for diagnosing substance use disorder, where the "substance", in this case, is the "act of gambling". At the same time, they made it clear that one does not have to "commit illegal acts to finance gambling" before the person is diagnosed of a gambling disorder.

Some gamblers are seeking excitement or action in gambling, others are looking more for escape or numbing. Both of which represent scenarios in which a gambling disorder might be present.

Juxtaposing the list of nine scenarios with responses from our participants indicates that many Nigerians show signs of a gambling disorder, albeit mild.

We are at mild today, in no time, we would be at moderate and then severe if things continue unabated.

In the course of this article, we came across the study of Abeeb Olufemi Salaam.

Abeeb surveyed 189 “area boys” in Lagos and randomly interviewed 11 of them. His analysis revealed that over 50% of the participants gambled more than three times a week.

His findings correlate with our field exercise. Del-B*, who is a graduate of a famous private university in Nigeria admits to gambling three times the week before. This frequency indicates a strong propensity to gamble and a likelihood that he might have a gambling disorder, but we’ll need more responses to ascertain.

Abeeb’s study suggests that the illusion of reward - the idea of a big win, is an explanation of why people gamble so much and develop this gambling disorder. Also, “loss-chasing” could be another factor, where gamblers bet more in an attempt to recover from a loss. Another probable reason for the pervasiveness of sports betting is that punters feel they have more control of their luck, and this, compared to other forms of gambling, is relatively accurate. You can bet on the outcomes of games from basketball, volleyball, hockey, tennis, darts, rugby, cycling, MMA, water polo, football, and golf.

In conclusion, betting is becoming increasingly popular in Nigeria for so many reasons. Researchers Anselme and Robinson argue that the motivation to gamble is determined by the inability to predict reward occurrence.

It is difficult to tell the extent and severity of gambling disorders in the country, however, we urge our health institutions to pay closer attention.

But how did we get to a point where betting Nigerians show signs of an addiction to gambling?

*  refers to the use of a pseudonym in place of the participant's real name.

A lot of people have contributed to this project, we hope to thank them when the final post in the series is out.

Don't miss out on the next betting story, leave us your mail below.

Online, Nigeria is best known for her involvement in online scams. However, a bunch of young Nigerians who work in Tech are using their online influence to shape the narrative by leading communities. We spoke with Williams "iChuloo" Imoh, a developer and community volunteer who now works at Andela.