Editors' note: Read the first part of our Betting series, as this is a continuation.

Supporting European football clubs like Real Madrid, Barcelona, Chelsea, Arsenal and Manchester United (ManU) is trendy in Nigeria. Fans of these clubs can be seen sporting expensive (compared to minimum wage) club merchandise, arguing with friends and even sobbing at lost games.

The love (and confidence) for their club has led many to stake bets on the outcome of their matches. On a lighter note, many do not share this same patriotism when it comes to betting on Super Eagles. A phrase like: "I love Nigeria, but I will rather bet my money on a team that is more likely to win", is common. For punters and bookmakers, historical data and analysis is key. A simplified version of this is, "If Chelsea has been beating Watford every time they meet at Stamford Bridge, then it is more likely that they'll beat them again. Hence, the odds of Chelsea winning will be low because it is very likely", explained Del-B*. Likewise, if Argentina has always beaten Nigeria, what are the odds that Nigeria will win this time?

Less than a decade ago, there was no easy way for football enthusiasts to put their money where their mouth was – bet. Dogged fans interested in betting would have to go on European betting sites like Bet365 and Betway. But, this came with a complicated payment and account verification process.

Thereby, creating a gap for local bookmaking companies to fill. At the same time, major European betting sites like Betway having seen the trend opened a .com.ng site that allows Nigerians bet and pay with naira.

Although, there are now local bookmakers, bettors still place some of their bets on international sites, their reason? – more cash-out options. Unlike many Nigerian bookmakers, international bettors have more cash-out checkpoints in a game. Del-B tells us that “BET365 will allow you to win the full amount of your bet if your predictions are correct by half-time”. For instance, if a bettor predicts a win for the away team and that team is leading by two to three goals at half-time, the bettor is allowed to cash-out in full (i.e. take their winnings).

We reckon this might be a loss for the house, but it is a small price to pay to acquiren and retain customers (bettors, in this case). Del-B admits, “Maybe, but they are very big so…”.

The race to the bottom

Given the low rate of internet penetration at the time they launched, Bet9ja and its ilk utilised an aggressive offline strategy - agents with shops. They created a network of agents by selling franchises to interested parties.

It has paid off, and they’ve been able to move their customers online. As it stands, Bet9ja.com is the second most visited site in Nigeria.

The case of Leo (from part 1) is not uncommon across Nigeria today. Let's meet *Tunde Laolu.

Tunde is a 25-year-old lanky Nigerian who owns a Bet9ja franchise on the mainland of Lagos.

Majority of my customers come in for football

“There are many events you can bet on, but the majority of my customers come in for football”, Tunde starts.

“And because it is a seasonal sport, our patronage varies. During the on-season from August to May, a minimum of 60 people come into my franchise daily. Unlike the off-season at most 40 gamblers come in here”, he explains while concentrating on the screen, printing slips for his customers.

The lower figure of 40 gamblers corresponds with my count (35 punters) at a Bet9ja store on Isaac-john street, Ikeja last month.

How much does a betting company make in a month

Let's use Lagos as a sample state working with Agent Tunde's figures as a case-in-point.

On the average, we can estimate that he receives 1200 offline visitors per month.

We understand that in reality there will not be this many shops because of several issues like the sparse population of some LGAs which makes the demand for multiple betting shops lower. For those places, it would make more sense to have a shop within 30 minutes of walking distance. After rough calculations, we can estimate that there would be about 3033 Bet9ja shops in Lagos State.

Assuming each of the bettors spends a minimum of ₦100 per visit. That is, they only place one slip which is highly unlikely as many bettors like to hedge their positions. In the words of Del-B,

"I always place two slips; 1 high-odd slip that will likely burn and a low-risk slip with an 80% chance of pay-out" – Del-B

We can then estimate that in Lagos alone, Bet9ja turns over the equivalent of the number of shops, multiplied by the number of visitors and the amount they spend. That is 3033 * 1200 * 100 which equals to ₦363 million (about $1 million) monthly. This figure comes alive when you realise that it doesn't yet account for purely online visitors, which although might be a small number, it is still tangible.

Bet9ja turns over about $1 million monthly in Lagos alone.

Although they were licensed by the Lagos State Lotteries Board (LSLB), they have the permission to operate in other parts of Nigeria. Now, let's imagine they make only half of this in the other 35 states, that would bring the national monthly turnover to $17.5 million.

This number is not too far from the 2016 prediction of KPMG's John Tamara – $10 million, when you account for inflation and a growing market.  John estimated Bet9ja's monthly turnover to be $10 million. Similarly, NairaBet, the second largest bookmaker in the country was reported to be turning over between 3 to 5 million dollars. And they are estimated to have a profit margin between 20% and 30%. 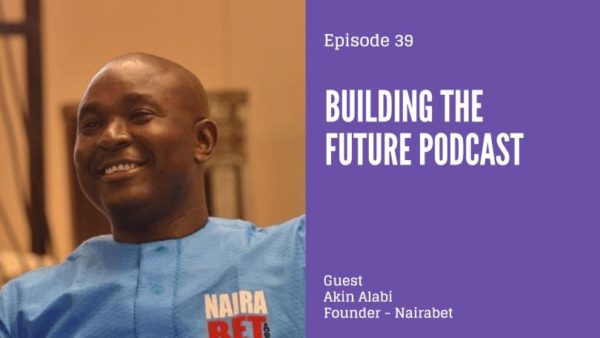 Speaking to Dotun Olowoporoku, host of Building the Future Podcast, Akin Alabi, Founder of NairaBet states that he has 2 million subscribers on his platform. Assuming only 80% of that number bets ₦200 that will mean a turn over of ₦320,000,000. Extracting a profit of 20% would land you at about ₦64,000,000.

Nigerians do not place safe bets, due to their low buying power. So, if they want to lose their ₦100 they don't care to lose it. Unlike, someone in a more developed country betting the equivalent of 1 million naira, they will rather go for the safer bets. – Akin Alabi

However, betting is beyond sports. In the thick of the 2015 Nigerian general elections, Akin Alabi's Nairabet offered odds of 1.40 for a Goodluck Jonathan victory and odds of 2.0 on a Muhammadu Buhari victory. This implied that many thought GEJ was more likely to win, therefore, the odds were lower than that of PMB.

The next section of this piece examines more of the peculiarities of the Nigerian market when it comes to betting.

*–not their real name.

With three successful editions held, this year's Lagos Startup Week would focus on getting started as an entrepreneur in tech. This follows last year's Visionary theme that talked about how startups can challenge the status-quo, and how innovators can shape the future.

Online, Nigeria is best known for her involvement in online scams. However, a bunch of young Nigerians who work in Tech are using their online influence to shape the narrative by leading communities. We spoke with Williams "iChuloo" Imoh, a developer and community volunteer who now works at Andela.