Under The Hoodie is a weekly series where we talk to people about their journey into tech. It focuses on the intersection between life and career. UTH Week 16.

Damilola Oludumila is a 23-year-old user researcher at Webflow where she’s focused on building & managing the research operations system as the organization scales. In this edition of Under The Hoodie, Damilola talks to us about carving a path for herself with User Research, and how essential research is for startups. 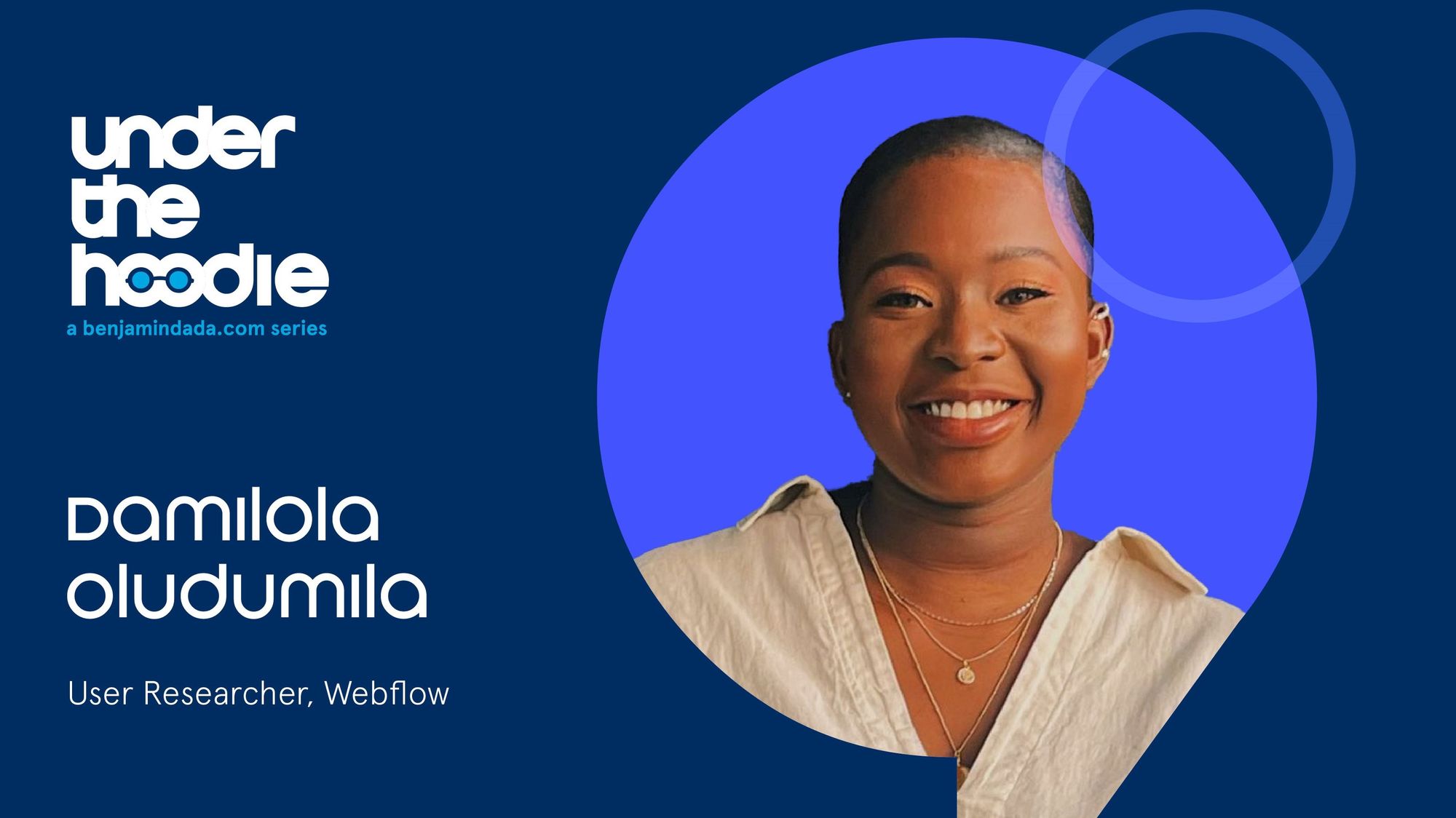 Sometimes, people on the team want to do some research and are unsure of how to go about it. I meet with them to discuss their research challenges and help them come up with a research plan/guide, and even sometimes help with generating the report.

Although I still function as a regular User Researcher, the core of my current role is supporting my colleagues to do their own research.

User Research is one of the less-traveled paths in tech. How did you find it?
I trace my love for user research back to my school days. I did my undergrad studies at Covenant University, where I studied economics. Back then, the school used to emphasize entrepreneurship. There was one professor who was doing his Ph.D. in Innovation Economics and he would say intense things like “innovate or die”.

That was around the time I started to get interested in entrepreneurship. Then, my friends and I would read up all we could find about entrepreneurship. That drive for entrepreneurship would later influence my career choice. So, when I left school in 2016, I was very sure I didn’t want to do economics, despite being very good at it.

After school, I tried my hands on a couple of things - cinematography, photography, interned at a studio, customer service, etc. It was just an adventure of exploring different things.

I had already gotten admission to a school in Canada by the summer of 2016, so I spent the time hanging out with some of my friends. Two of them, Yemi Adegbayi and Laolu Daramola were quite interested in tech at the time, so I followed them to conferences and met business owners.

Soon enough, Laolu had a Fintech idea he wanted to execute and he needed some support from the business side, so he asked me to help with it. We built something small and tried to pitch it to a couple of founders. The response wasn’t really encouraging, so we let the idea die. That experience was my first foray into tech and I loved it.

Eventually, when I got to Canada where I was supposed to do my economics Master's degree, I decided instead to look for a technical Master’s degree. At that point, I wanted to be able to add technical value to entrepreneurial ventures. I was able to get admission at the University of Toronto for Information Systems and UX designs. It was still an unpopular course but after a couple of classes, I thought it was quite cool.

I was still uncertain about it though, so during practicums, I would take on internships in other tech fields. I took on internships in Product Management, Business Analysis, Data Analysis and UX. I enjoyed doing my UX gigs, so I decided to settle with it. It was a place I was able to shine effortlessly.

I spent some time doing product design, but I didn’t really appreciate the visual side. I was more excited by talking to people, understanding their problems and being able to turn those problems into product requirements.

After that, I decided to specialise in UX research. It was a hard decision to make, because I was significantly reducing my chances of finding a job since there were not a lot of UX jobs at the time. But I strongly believed that if I did a good enough job, I wasn’t going to struggle. I made up my mind and have been on that journey since then.

What was it about UX research that got you excited?
Aside from talking to people, UX research taught me a lot of things. Over the last few years, it has even changed my personality type. There’s a personality test I used to take. Previously, my results showed that I was an analyst, but these days, my results show that I’m an empath. I think it’s because UX research teaches you to set your ego aside and prioritise other people—your user.

You also realise that you’re doing something that has real life effects on people’s lives. Bad UX has made people lose money or even their lives. Just knowing that you’re contributing to make people’s lives better is exciting in itself.

I can’t overstate the excitement of listening to people though. Just listening to them talk about their lives — the highs, lows, pain points etc, is thrilling for me.

You mentioned that your foray into UX research was influenced by your entrepreneurial drive. What’s that nexus between UX research and entrepreneurship?
One thing about building that people don’t talk about a lot is not knowing what to build. You can identify a problem, but building to solve that problem is where the tea is. It’s less about the idea but how you are able to execute it. UX research is able to support execution by taking you from having an idea  to mapping out what a product should look like.

People talk about experimentation being key to entrepreneurship, and that is true. However, experimentation is expensive, it costs time and money. The more information you have, the better for you. UX research helps entrepreneurs learn more about the people they want to serve and the kind of product that best suits their needs.

UX research requires you to be very humble, to throw your ego in the bin and listen to the people you are serving. I think those qualities are important for founders. It’s not just talking to users though, it’s understanding their mental models and motivations. That research can also influence product strategy in the long run.

What would be your advice to people looking to start a career in UX research?
For a new person coming in, I’d say focus on setting your ego aside. It’s not easy to do, but it’s necessary.

Then there’s training yourself to be a better listener. Good listening is learnt. It requires follow-up and feedback related to what people are communicating with you. It’s an important skill that helps generate rapport with the people you’ll be speaking with.

I’d also advise them to read and grow their knowledge base. You’ll have to speak with people from different walks of life and you want to be able to relate with them. Both as a researcher and as a person, reading is necessary.

Finally, I’d say people should slow down and grow. Everyone seems to be in a race to be a senior these days. But if you really want to grow, I think you need to be patient with yourself. You don’t need all the posturing or fame, what you need is to develop your skills. Most of the people I admire are not even popular on social media. If you really know your stuff, people will find you eventually.

BENJAMIN DADA | Impressive reporting on tech in SSA
—
Under The Hoodie - Oludumila Damilola, User Researcher at Webflow
Share this