On Tuesday, 16th January, we attempted an analysis on the effect of open banking on Banks like UBA who publish digital solutions like Leo through social media platforms like Facebook (Messenger). This was done after a test-run we carried out on Monday, 15th January (a day before).

Today, we want to show you how UBA's chat banking bot, Leo, works on FB, from our experience over time. As a bonus, we have included mock-ups with screenshots, just to bring it to life.

Please note, the mock-up does not necessarily reflect the phone on which this experiment was carried out.

For diagnosis/comparison purposes, Testing was carried out on the latest version of Android - 8.1.0 using Google Pixel (a high-end phone), so there might be small differences in the User Interface (UI) on a different device/OS spec.

However, it is believed that the Leo chat app will work on any phone that Messenger runs on. If you do not believe, try it out after reading this!

What is a ChatBot?

In plain English, it is "a computer program designed to simulate conversations with human users, especially over the Internet", according to the online Google dictionary.

The goal of a ChatBot is for users to not know whether it is a robot or human responding to them, hence, passing the Turing Test. Usually, in doing this, the chatbots are usually given the personas of humans.

For instance, in Leo's case, it is a male figure (LOL, the irony).

Here is a step-by-step process on how to access and interact with Leo. 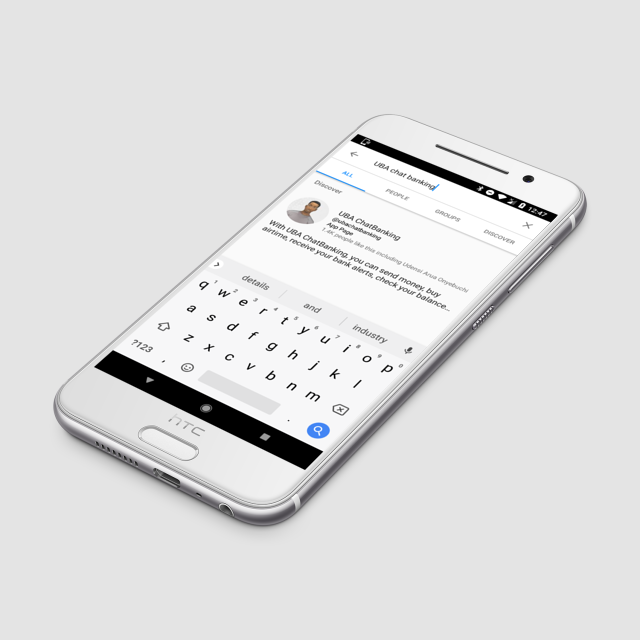 2. Send it a message, any message
For instance, I sent "get started" and it replied with "Hello Benjamin! I am Leo, and I can help you send money, buy airtime, check your balance and more :). It continues on another line, "Do you have a UBA Bank account?".

We believe the idea behind this is that a user triggers the Leo bot by sending it a message and it replies accordingly. If you are a first time user, it sends you an introductory message (in a bid to set you up interactively), while, if you are a returning user, it sends you something similar but perhaps, with a touch of familiarity. Just as you will expect from a customer service agent. 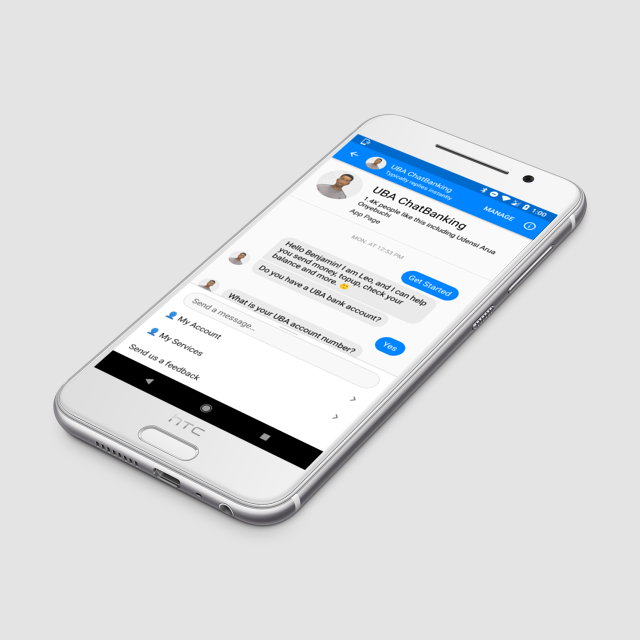 3. Follow through on the conversation with Leo
By following through on the conversations with Leo, I was able to complete 3 transactions that I would have had to visit a branch for or used either online banking or USSD technology.
[I want to show you a screenshot, just that there are too many pieces of PII (Personally Identifiable Information) like Account number, Name and transaction amount, so instead of telling me to blot them out, why not try it out here]. 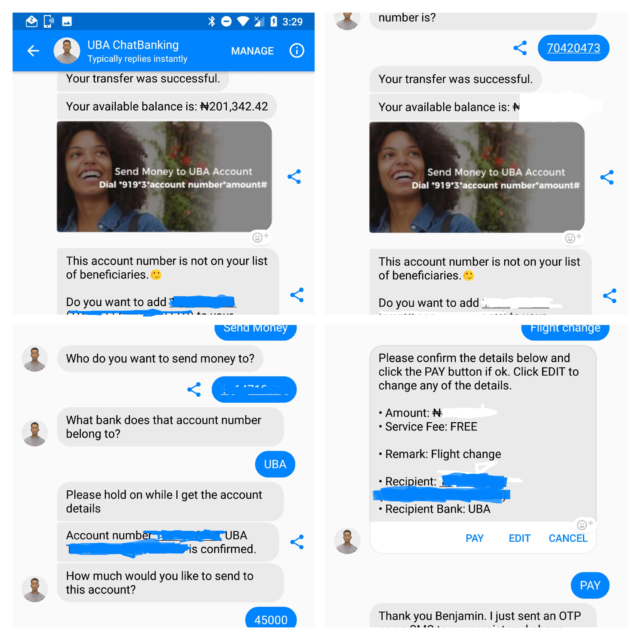 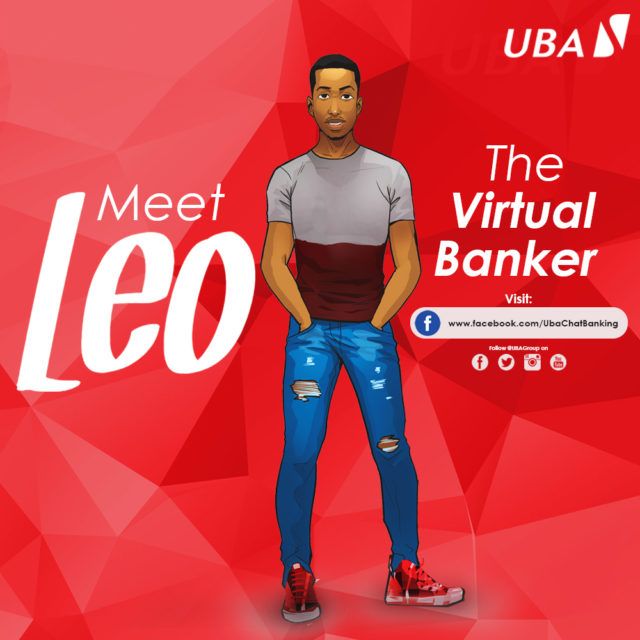 Here is why you should use Leo

Use Leo because it could be more cost-effective and seamless than USSD. Also, it's friendlier and more interactive than USSD.

Quick maths - To use UBA USSD banking (*919#), you'll need a minimum of 20naira. And then, your Telco operator (like MTN, Glo, 9Mobile and Airtel) will usually charge you (see DCB below) for using their network per transaction initiation. So why not save your money to buy data and use Leo that does not time-out like USSD?

Timing out means, you'll have to pay again to initiate a new transaction. Also, I know a lot of people that always have mobile data/internet-access but may not have airtime credit. So, should they be excluded from banking services?

Below, I've tried to make an unbiased comparison between Leo and USSD.

Similarities and differences between Leo and UBA USSD ("USSD")

Other things to note

P.S - At any time, during the chat with Leo, you can access the menu tab at the bottom of the chat. Which grants you instant access to the following menu options: "My Account" and "My services".

Some of those menu options that stick to the bottom of the page are also displayed as "preferred responses" to Leo's already pre-programmed questions. So you can either just click on it (and it will display in your chat history as a message from you) or manually type in what you want to do. 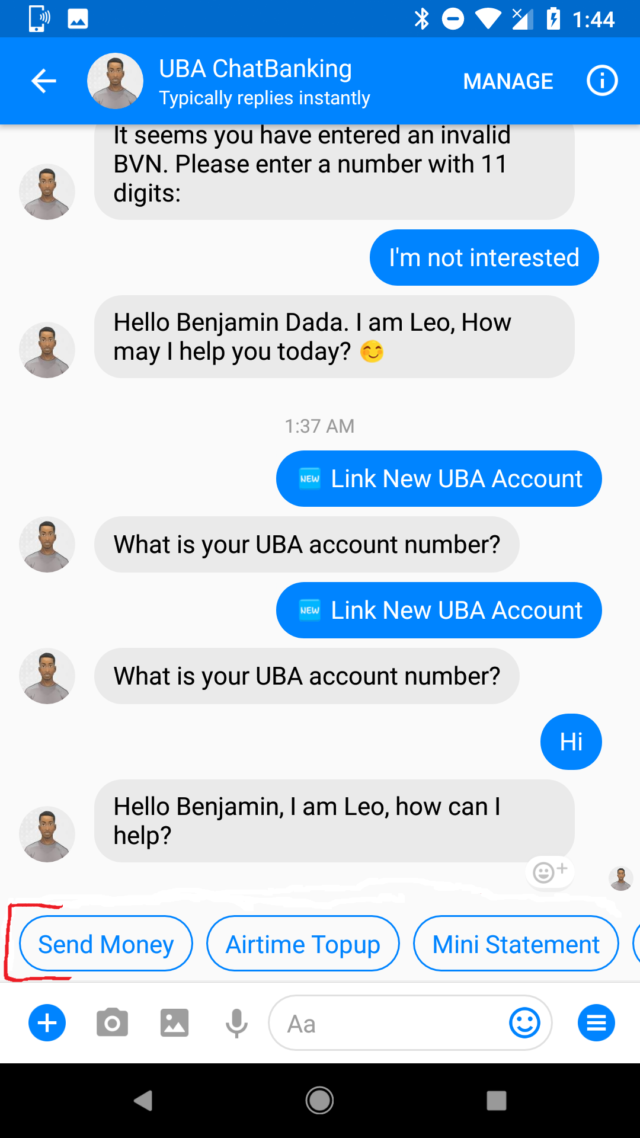 Fortunately for me, I had a UBA Bank account, so, it proceeded to ask what the account number was, which I supplied and then followed the conversation through until I was able to achieve my aim (send money).

If I did not have one, it would have offered to create one for me on the spot without having to go to a branch. I know because I tried it!

If this is your first time using a chatbot (like Siri, Google Assistant, and Alexa), then you might find this weirdly exciting. However, Siri, Google Assistant and the likes are more robust, therefore they tend to have more intelligent responses especially when it comes to Natural Language Processing (NLP). This is understandable as Leo is just a chatBot and not a fully-developed AI personal assistant. Hence, Siri to Leo is not an Apple-to-Apple comparison.

Perhaps, comparing the performance of one of the 100,000 monthly active bots on Messenger would yield a better comparison.

In summary, using Leo offers cost-savings and by-passes the charge many Telcos tend to impose on USSD transactions. And if this is successful, we might just see other banks follow suit in developing a ChatBot for interacting with their (current and potential) customers.