Is there a reason why most Nigerians, regardless of tribe, religion, and politics seem to be proud of young people doing great things?

Lagos, Nigeria –  Let's guess. It is the belief that the Nigerian system works against the progress of an average Nigerian. Such that, when we see (young) people succeed in spite of it, it becomes an exception. This is what many felt when Codebeast announced the coming of an international developers conference to Nigeria. Disbelief replaced the initial shock, before giving way to skepticism and palpable optimism. At the end of it all, we stood in awe of the success of such a great event. 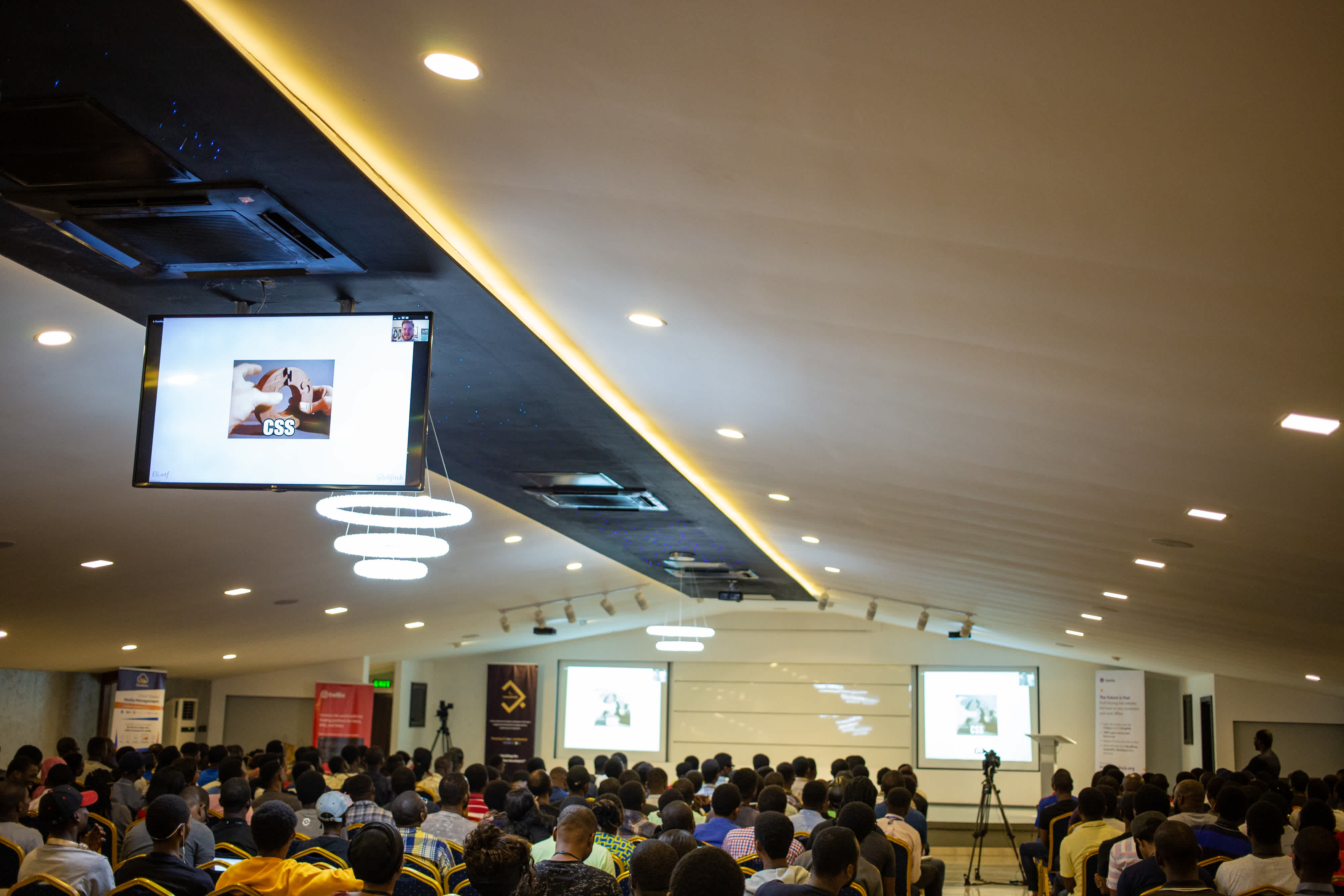 An overview of the Concatenate conference

We were passionately involved. From sensitising people about the event to live tweeting from the event, we took full ownership.

It's from that vantage point we want to take you through an interesting journey of what we noticed.

The two-day Concatenate Conference featuring twenty-three talks was split into eleven on the first day and twelve talks on the second day. On each day, there was a two hour and thirty-minute break for networking and reflection on talks.

From here on, we will try to say enough to get you to the end of the article and avoid the technical details. For the curious, we hyperlink texts with links to resources that give an in-depth understanding of the concept discussed.

We have broken it into sections where we first talked about the organisation of the event, then Day One and Two.

Before the event, intending participants were made to register and given digital tags. As expected, all the slots sold out were exhausted. What was not expected was how fast they were filled – within 48 hours.

This is in contrast to the bad cultural habit of African time, where Africans tend to have a more relaxed attitude towards time.

Also, when it came to orderliness, Concatenate conference outdid the stereotypical Nigerian event. Even as participants quietly filed outside the main building during the registration process. 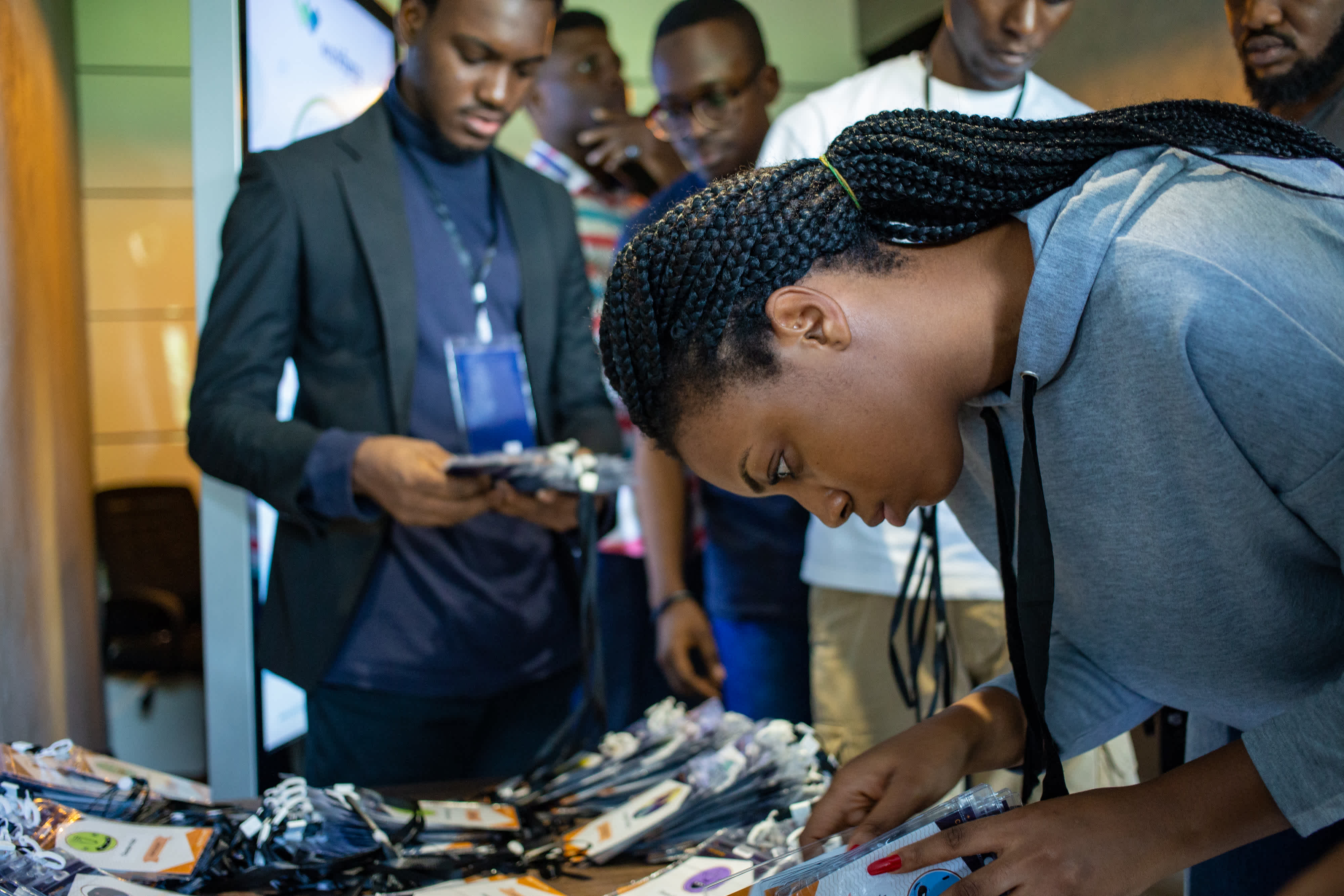 An attendee signing in with others queued up

The conference was lit with stickers and other swag items from sponsor companies.

This same spirit of timeliness was allowed to permeate the event itself. Even as the first session started at 10:00 AM prompt. 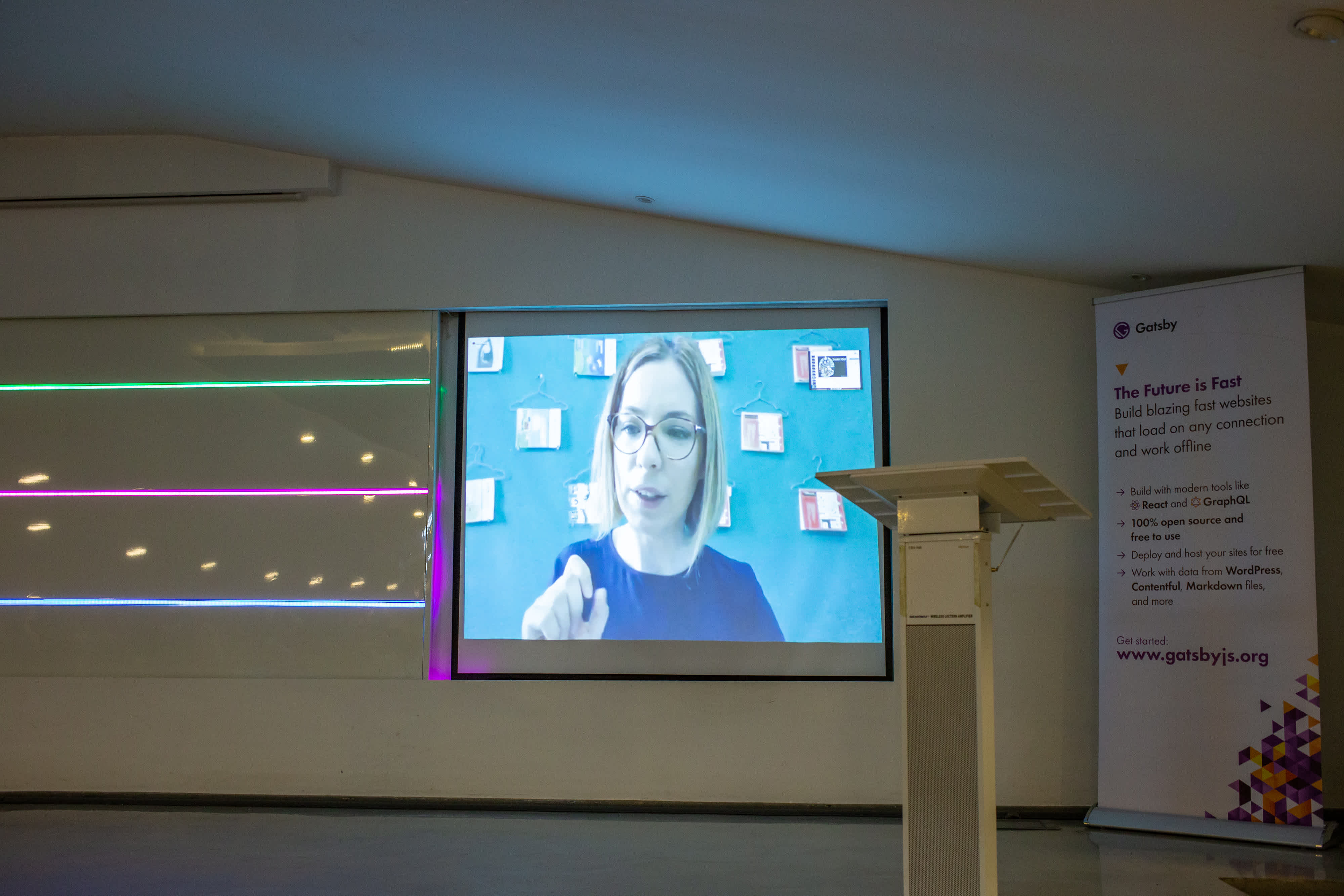 The first speaker, Simona Cotin joined remotely and delivered her talk on Serverless Systems. She spoke more specifically on how to build NodeJS APIs using Serverless.

Feel free to pree the schedule. Each talk was for 30 minutes.

"Think about what will happen if Twitter was never created because of the fear of being unable to meet the demands of the now 200 billion tweets per year", a lightly edited version of her talk reads.

"That's why I absolutely love serverless because it allows me to create the next Twitter?", she said.

"Serverless applications are the ones that significantly depend on third-party services to serve them data", she went on to explain.

Like the rest, of the talks that day, it was an exciting and inspiring session for the young Nigerian developers looking to grow their craft. 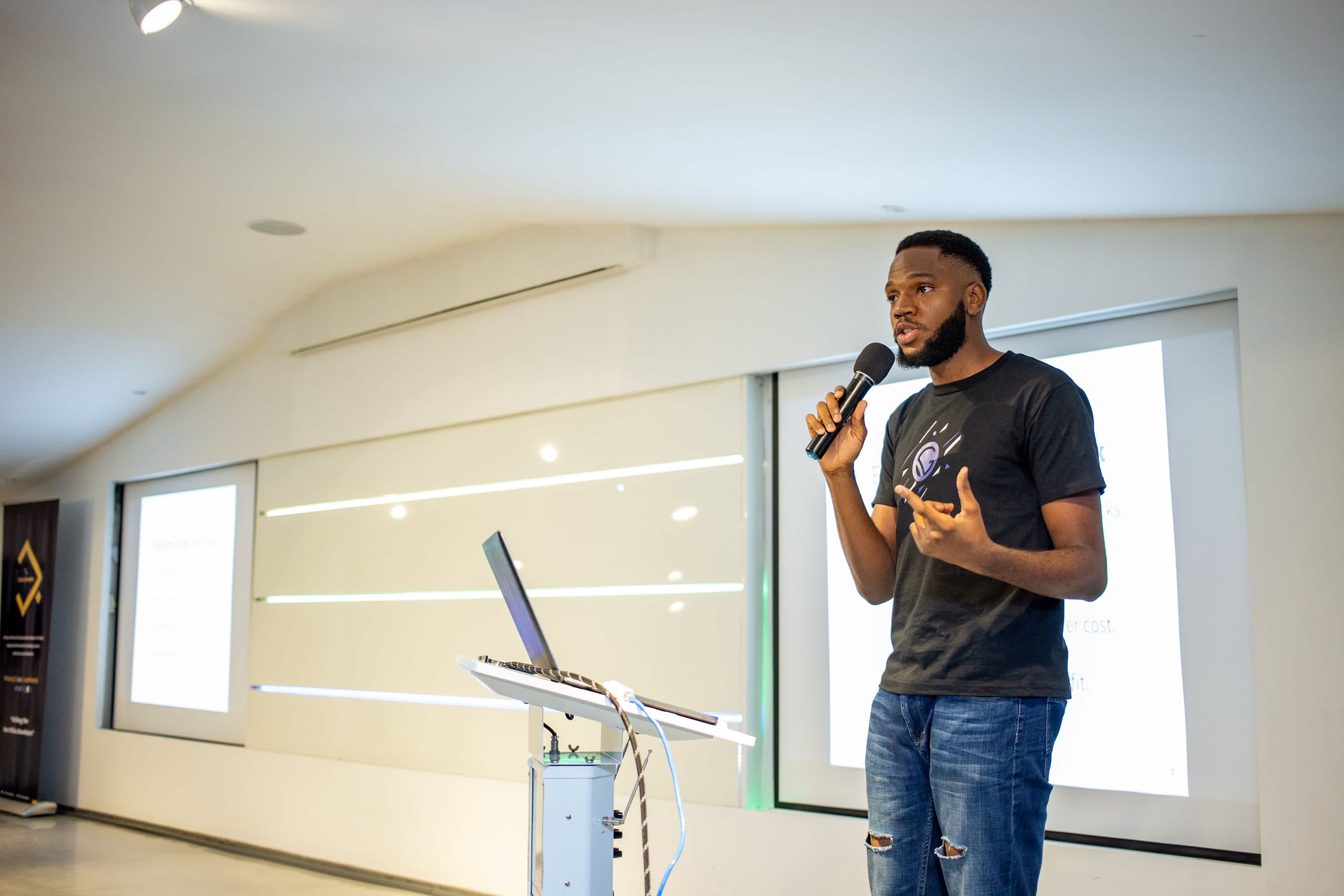 As scheduled, her session lasted 30 minutes and the next speaker William "iChuloo" Umoh was up. This time around, iChuloo was physically present and delivered a talk on Static Sites on Steroids spiced with light-hearted jokes. He based his own talk on GatsbyJS, a static site generator.

Towards the end of his allotted time, he fielded questions from the audience.

One response stood out. The event anchor who is a celebrated developer, Unicodeveloper, decided to lead the Question and Answer (QnA) session with a teaser. The conversation went thus:

Unicodeveloper: "...Can I use Gatsby to build a social network?..."

iChuloo: "Is your social network going to be a static site?"

The crowd erupted in laughter and a round of applause for iChuloo.

He ended his session by answering a question about what a static site is. It is "the opposite of a dynamic site", he quipped. On a static site, the content is served as it is stored on a content delivery network (CDN). Simply, it does not interact with a database server, so it loads faster than an average web app. 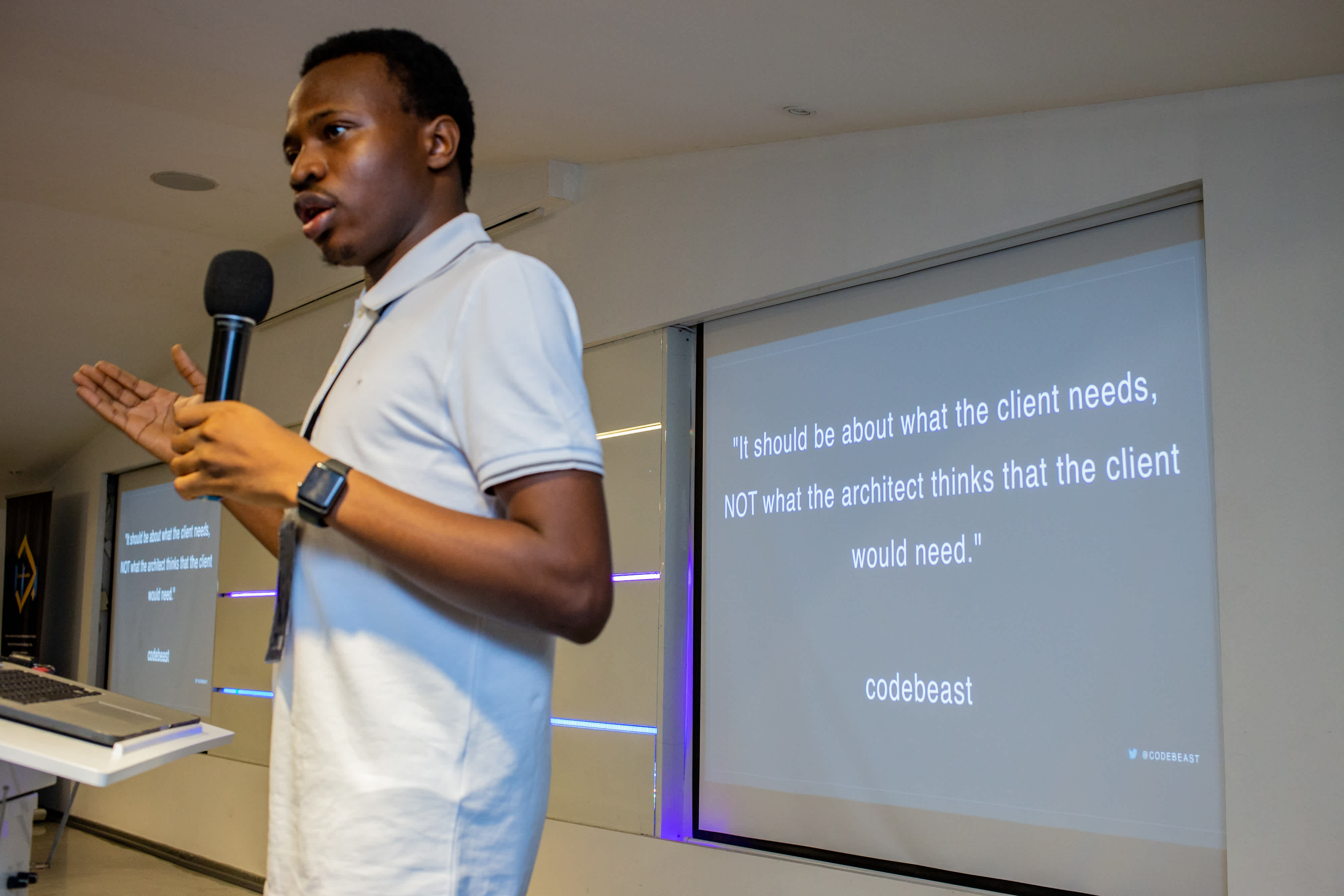 Codebeast on GraphQL at Concatenate

Right on the hour, Codebeast, the event co-organiser mounted the stage to talk about GraphQL comparing it with REST API. GraphQL is a query language developed by Facebook that aims to make fetching data using APIs easier. Generally, APIs are a way to fetch data and return responses. REST was the de facto style after moving on from SOAP.

You can ignore the details. But one thing you should note is that, with programming, frameworks, tools, and languages are ever-changing. And Developers have to keep evolving or in no time they will be programming for the past. Evolving with the tools is easy if one understands the fundamentals of Computer Science and Programming.

Colin Bendell’s talk about Service Workers followed and at noon, Sarah Drasner of Microsoft, a co-organiser remotely delivered her talk on Serverless Functions and Vue.js. 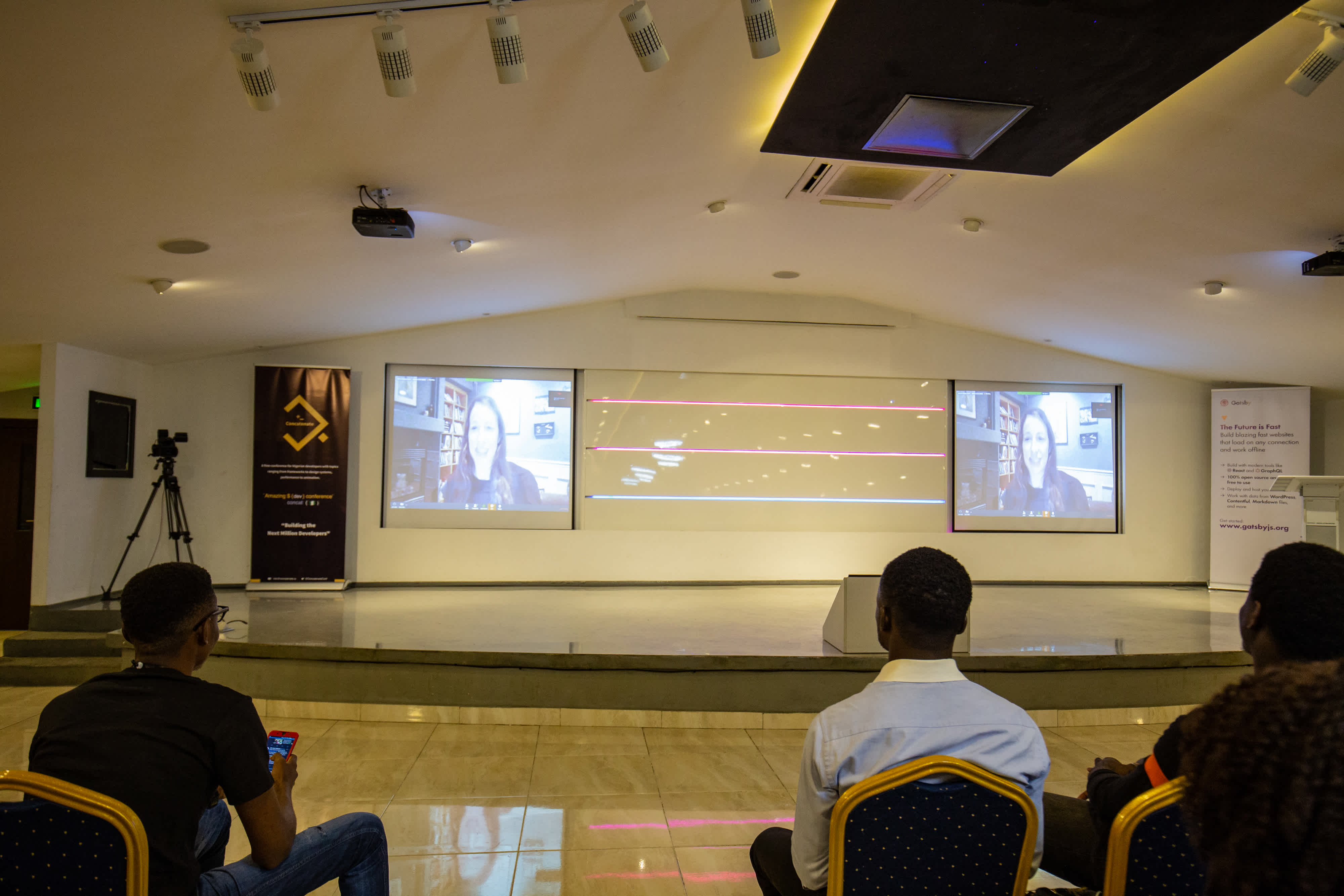 It was soon time for a break. Participants seized that time to get intimate sessions with some of their programming idols. 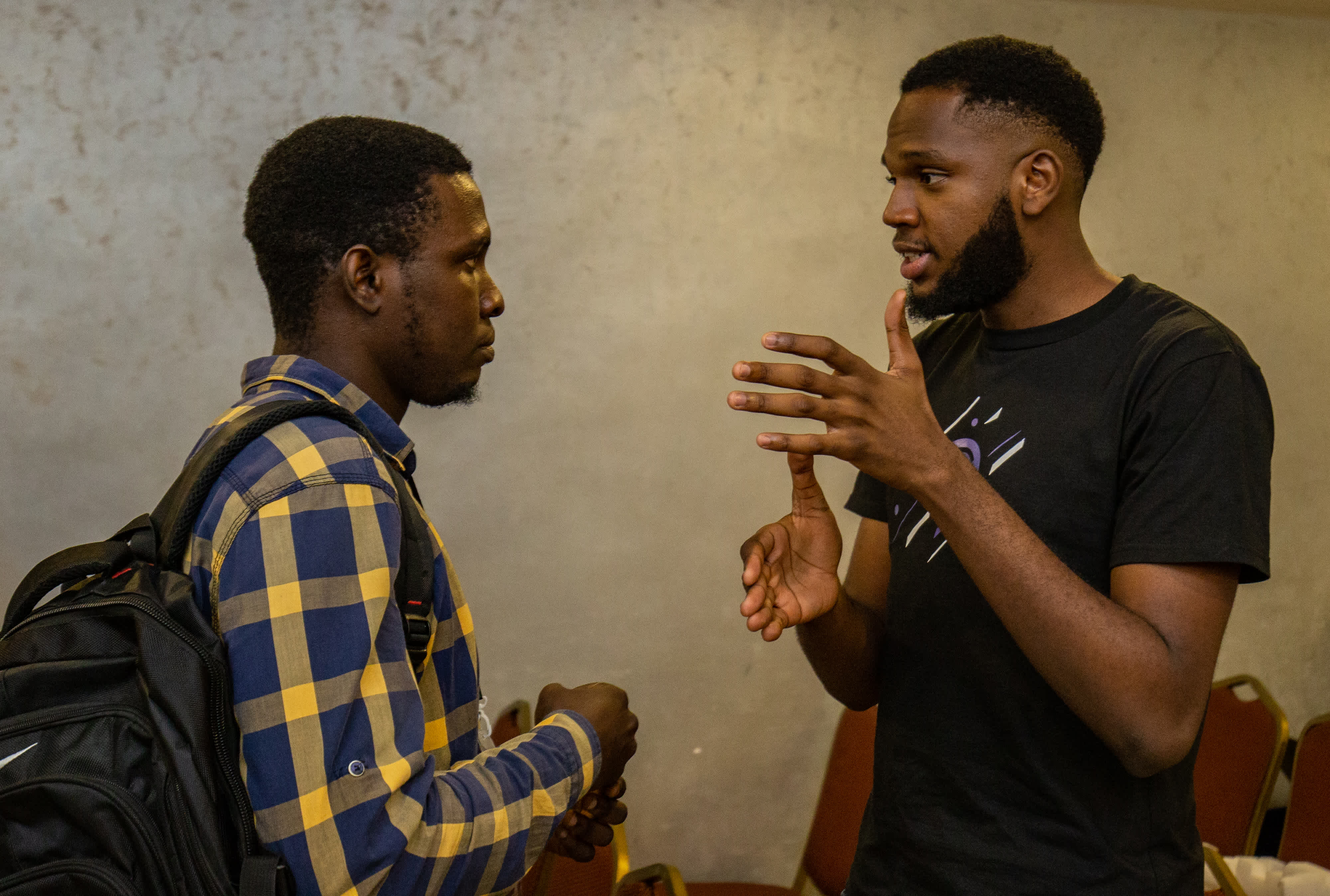 Speaker, iChuloo explaining a concept to a Concatenate participant

Others used that time to catch up with their friends. With many meeting their Twitter friends offline for the first time. 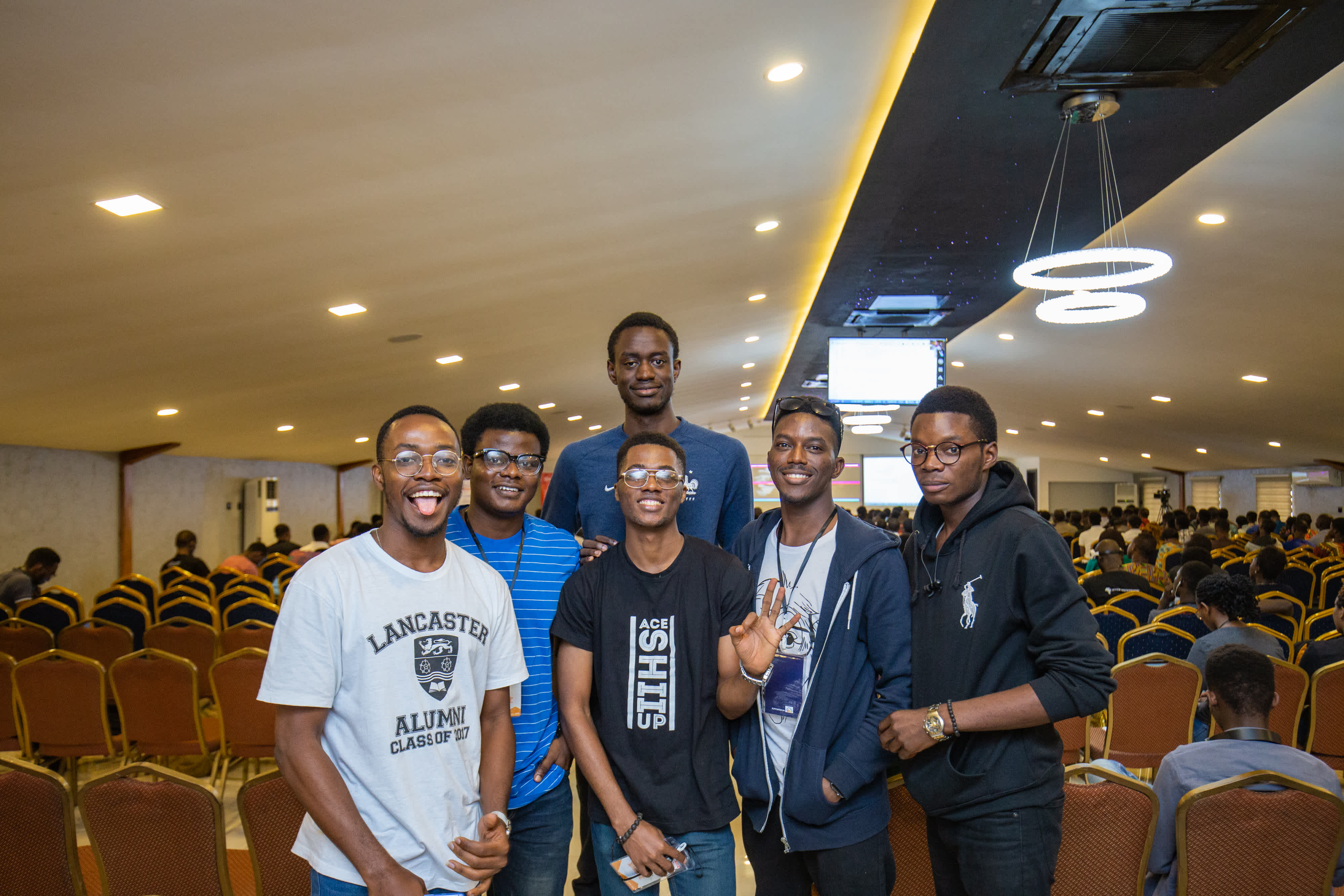 Burke Holland was available to give his talk on VS Code. Jem Young, Zach Leatherman, and Jason Grigsby gave their talks before Aaron Gustafson announced a free e-book while delivering his paper. There was, of course, a big cheer. Who does not love free stuff?

The final session of the third day was delivered by Shirley Wu, who got a standing ovation on the back of her brilliance. She built four live demos during her 30-minute session. We let her know on Twitter and of course, she was very happy.

Same conference but with more people in attendance. We suspect that the social media buzz from the day before plus it being a work-free day contributed to the influx.

The second day started with soft music before cheers greeted the presence of a mystery speaker on the screen. Alas! it was none other than the Nigeria-born, London-based Google Developer Expert, Sani Yusuf. He is a veteran speaker and the founder of Haibrid, a consultancy that used mobile technology to develop educational and healthcare solutions. His talk transcended tech and talked about being the better versions of ourselves. It was a brief, and inspiring session.

The first scheduled speaker of the day, Gift Egwuenu of Andela talked about Crafting Rich Documentation with Vue Press. Jeremy Keith remotely gave his talk on The layers of the web, during which there was an amusing quote from his slide which read “we march backward into the future.” Eli Fitch took over and gave his talk.

We march backward into the future.

Prosper "Unicodeveloper" Otemuyiwa made a ceremony of introducing the inimitable Wes Bos whose talk was about CSS Grid. After his talk, there was a round of applause. He engaged in a short, and insightful QnA session before signing out. 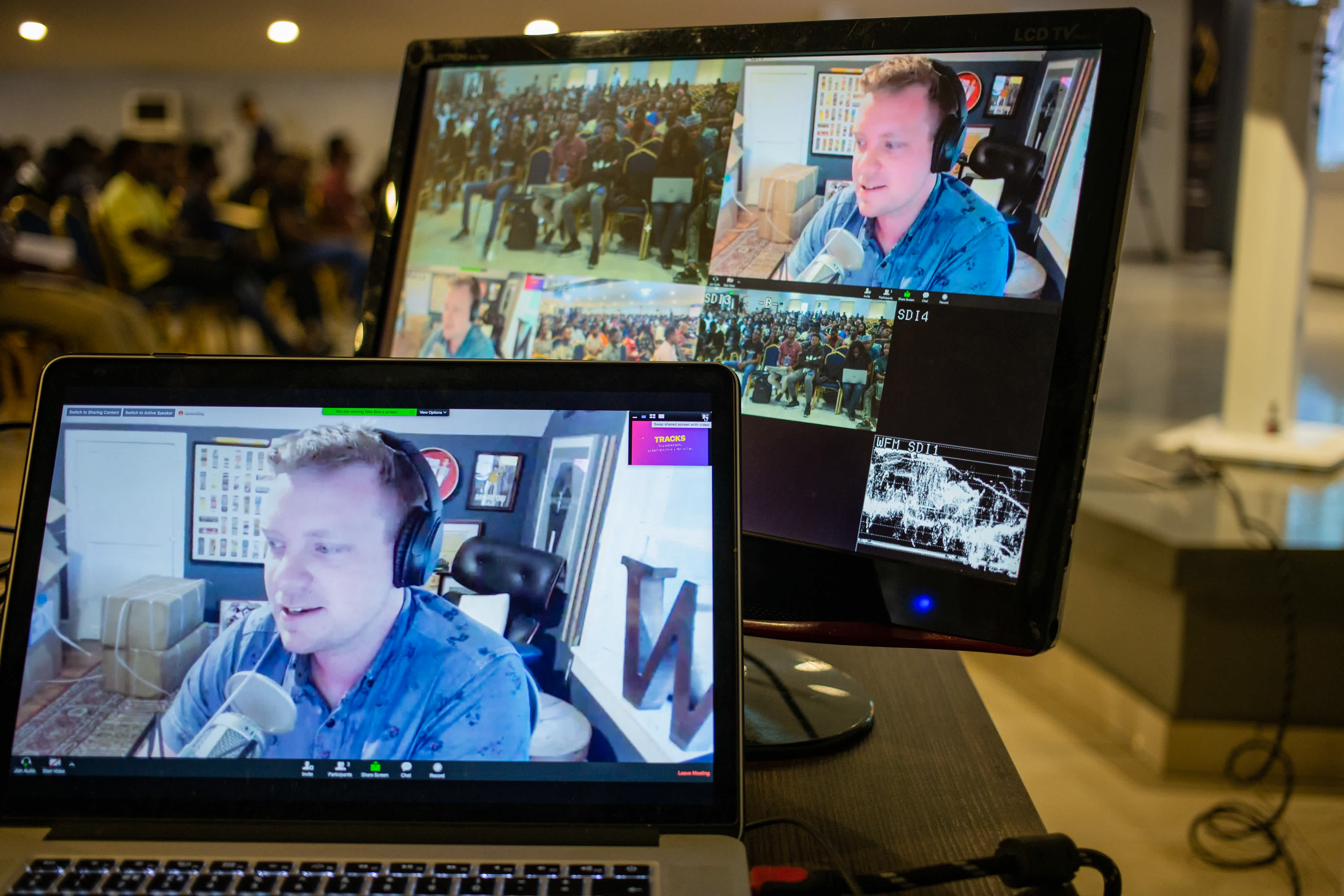 Omayeli Arenyeka talked about Finding Unavailable Data before everyone took a break for refreshment.

Christopher Schmitt gave his talk on Image Formats and Optimization before Divya Sasidharan explained Vue components with common home utensils including pots, plates, rice, and water. The title of her talk was wittingly captioned A React Point of Vue.

Nigerian Google Developer Expert, Ire Aderinokun talked about Making Web Accessibility Easy. Sean Larkin thrilled the audience by dancing shaku shaku, and that was not even the best part of his presentation. 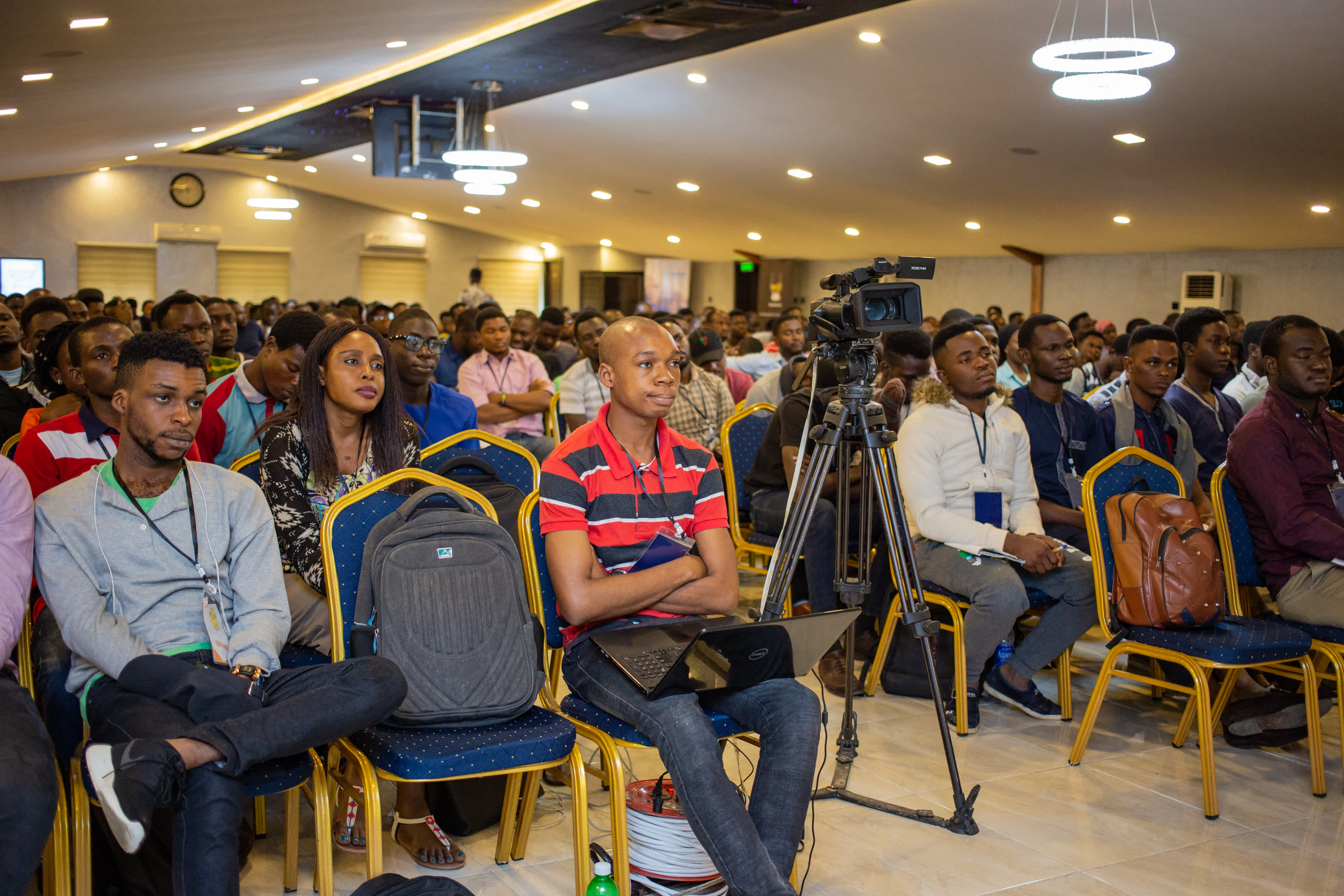 Afterward, Brian Holt (with a track record of Microsoft, Netflix, LinkedIn) gave his talk on the Power of Webpack and Babel before the sessions ended with a Mina Markham presentation on the Contemporary use of CSS Grid.

There was a range of gifts (T-shirts, textbooks, branded items) for people who answered reactjs-related questions, but none greater than a brand new PS4 for one of the attendees who correctly answered five questions using the Kahoot application. 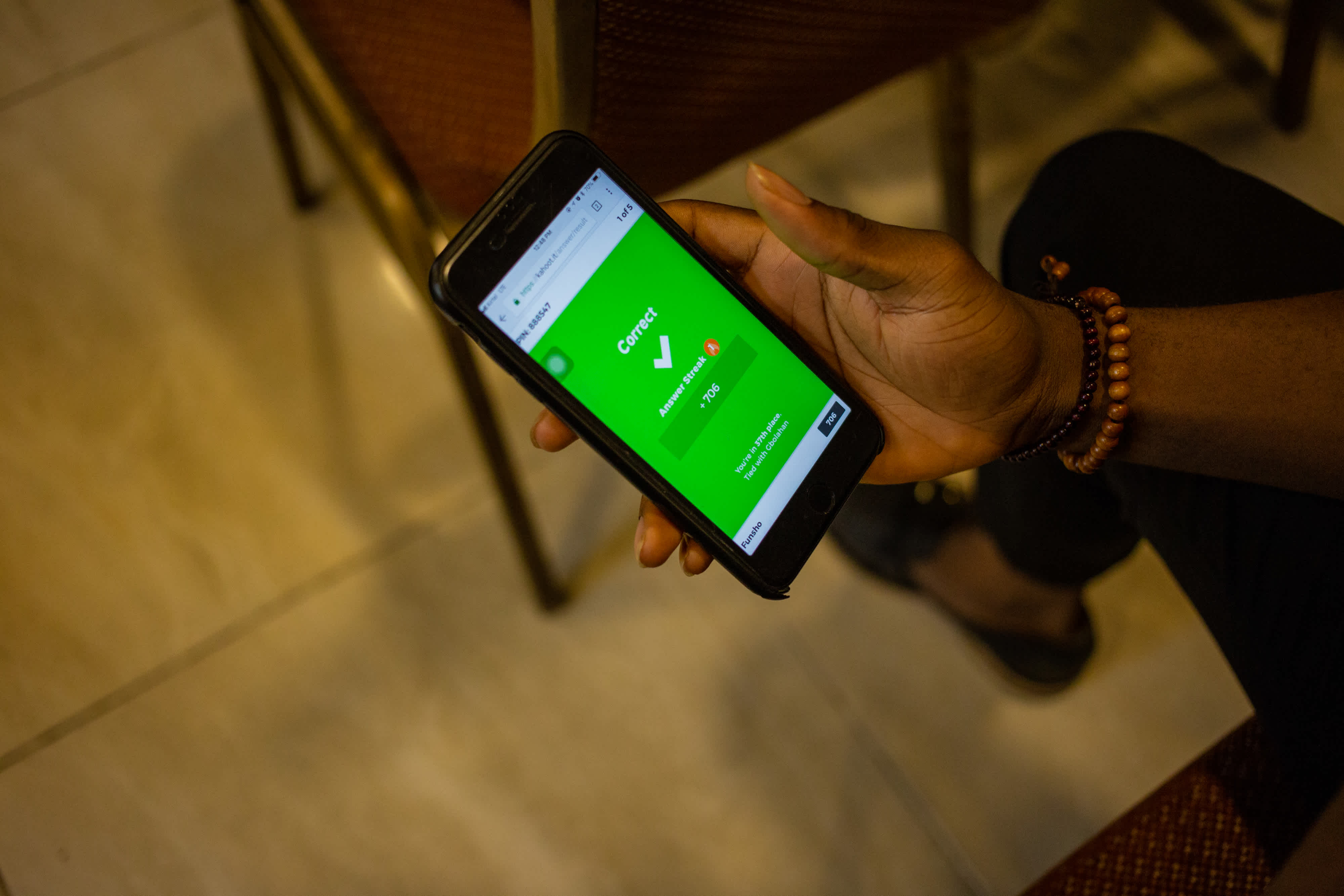 A concatenate participant correctly answering a question with the Kahoot app

23 high-profile speakers, 2 days, a serene venue, succinct sessions, "promptitude" that is almost unheard of on this side of the Atlantic, a timely networking opportunity for young developers in Nigeria and so much more.

It was, by any account, a resounding success. Cheers to all involved. The #Concatenateconf is another one of those things we can be unanimously proud of as Nigerians.

Perhaps this show of holistic excellence by the #Concatenateconf could be made the new norm in Nigeria. Hopefully.

The Team at Benjamindada.com

Invite us to cover your next event. Email team[at]benjamindada[dot]com

The pieces Nigerian EdTech startups are yet to fix The number of educational technology (EdTech) solutions leveraging the internet are on the rise. EdTech startups spring up every now and then; each one