The News: Some employees at Twitter's first African office in Ghana have been affected by the ongoing layoffs at the social media company, since its $44 billion acquisition by Elon Musk.

Benjamindada.com is yet to ascertain the exact number of employees at the 18-months-old African office that has been affected by the layoff. The Twitter purge would affect up to 3,700 employees, about half its global workforce.

Why it matters: Prior to its acquisition, Africa was a priority of the social media company. In 2019, its founder and ex-CEO, Jack Dorsey toured four African countries including Nigeria. Thereafter, he declared his intention to spend six months in Africa but was interrupted by the 2020 COVID-19 pandemic lockdown.

Later in 2021, the Nigerian government banned Twitter citing the persistent use of the platform for activities that are capable of undermining the country's corporate existence. One of the six conditions that led to lifting the ban in January 2022 was that Twitter will establish an office in Nigeria.

🐦
Recall that, Twitter established its first African office in Ghana in April 2021

Twitter has never confirmed nor denied it had an agreement with the Nigerian government. However, the company has since registered with Nigeria's Corporate Affairs Commission—one of the conditions. Per BusinessDay, the company's spokesperson said "there were no plans by the company for an office in Nigeria".

Zoom in: Although the employees laid off in the US team will be on the company's payroll until January 2023, it is unclear if the African team will have similar benefits. 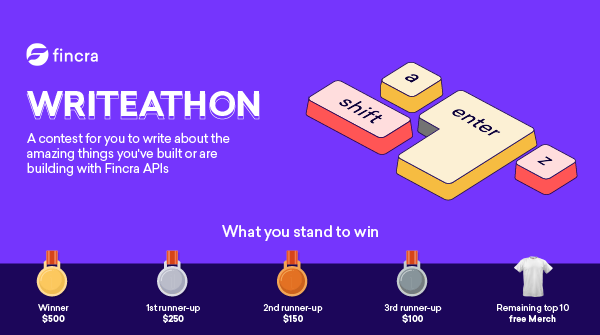 The Fincra Writeathon is here!

Uber agrees to lower commission fee in Kenya to 18%

The News: Global mobility company, Uber has applied to withdraw its petition against the new ride-hailing regulations by Kenya’s National Transport and Safety Authority (NTSA) that introduced a national cap of 18% per trip for the commission paid by drivers to digital taxi operators.

Uber has lowered its commission from 25% and obtained a license to operate in Kenya. Estonia's Bolt, Kenya's Little and Rwanda-based Yego have also received approval to operate in East Africa's biggest economy.

"We remain committed to Kenya and to creating economic opportunities for drivers and providing enhanced mobility for riders, as we have done since our launch in the market in 2015," Uber said.

Why it matters:  In September 2022, Uber appealed to Kenya's Supreme court to annul the new digital taxi-hailing regulations claiming that some aspects are unconstitutional, discriminatory, discouraging to foreign investments and infringing on its rights and those of its riders and partners.

"The introduction of 18% as the ceiling for the allowable commission has the potential to stifle innovation and reduce the petitioner’s economic feasibility of investing in the market," said documents filed by Coulson Harney LLP, the law firm representing Uber. Uber also faulted the condition that all ride-hailing companies must obtain a transport network license from NTSA to operate.

In the same month, Kenyan drivers at Uber and Bolt protested both companies' unwillingness to implement the latest regulation. As of the time of their protest, Uber charged a 25% commission per ride, while Bolt charged 20% contrary to the 18% national cap.

📢
It was a 100% acquisition paid for in cash and shares. Although the company was renamed MFS Africa, Beyonic's core product retains its name.

Why it matters: Beyonic, MFS Africa's flagship SME product, is a new offering from the group and will be launching in Uganda now that the company holds a PSP license. Beyonic will also leverage the IPI license for its virtual card offering.

"Small businesses are the engine of the African economy and the lifeblood of communities. Beyonic's primary goal is to promote the growth of these businesses, and by providing a centralised financial tool, Beyonic improves the way these businesses pay and get paid," Daniel Maison, Head of SME Growth for Beyonic, said.

Later in June, MFS raised a Series C extension round of $100 million comprising both equity and debt financing. This extension round brings its total Series C to $200 million. According to TechCrunch, they connect 320 million mobile money wallets across 35+ African countries and 700 corridors.

Hey! Spot the African startups that are part of the Techstars Toronto 2022 Winter Cohort.

Find more insights in the table below:

Get free access to our carefully-curated, real-time updated Funding Database for 2022.

Some female-focused accelerator programs for African founders include GreenHouse Lab, SHEBA, I’M IN Accelerator, Grindstone X Programme and The Women Entrepreneurship for Africa (WE4A) program.
Block Inc and Stillmark have invested a $2 million seed fund into Gridless, a Kenyan-based bitcoin mining company
The fascinating story of how Fiyinfoluwa Akinsiku, a microbiology graduate, transitioned into tech through an internship.
MEST Africa has announced Senegalese tech startup Kwely as the winner of the 2022 edition of the MEST Africa Challenge (MAC); a pan-African tech startup pitch competition.
Chipper Cash's valuation was slashed by 37.5%—from $2 billion to $1.25 billion before FTX's bankruptcy.